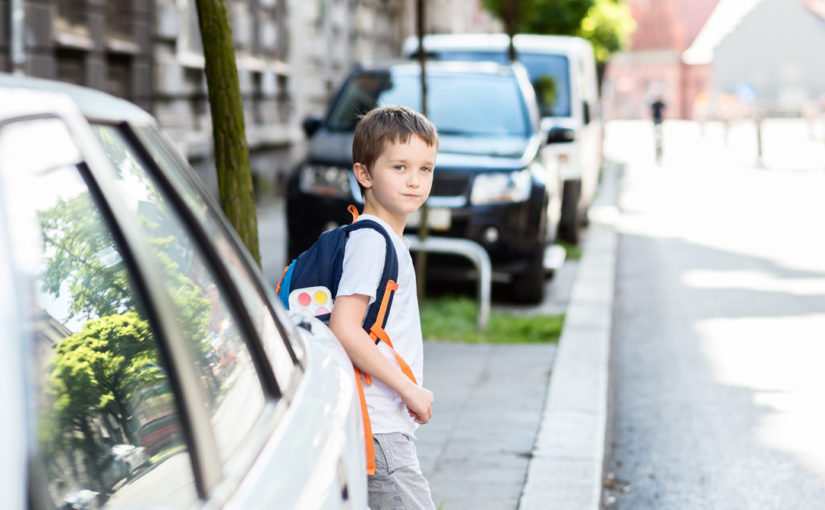 Vulnerable road users (VRU) are grossly overrepresented in road safety statistics. The World Health Organisation (WHO) estimates that close to 50% of all traffic deaths are VRUs. This means roughly 600,000 worldwide casualties per year. SWOV, the Netherlands’ Institute for Road Safety Research, defines VRUs as a group of road users that can be defined as ‘vulnerable’ in a several of ways. For instance by the amount of protection in traffic (e.g. pedestrians, cyclists and motorised two wheelers (motorcycles, mopeds and scooters) or by the amount of task capability (e.g. the handicapped, the mobility and orientation constrained, the young and the elderly).

VRUs lack a protective shell (vehicle chassis) and adequate restraints (seat belts, airbags). These prevent the body from the full impact of a crash. Moreover, they are light in weight compared to heavier motorised road users, which means that VRUs are thrusted, often even launched, in case of high impact collisions. Besides the direct impact on their body, this also results in additional injury risk from the subsequent impact. This creates an inequality whereby the VRU is virtually always the party wit the highest number of casualties compared to the better protected and/or higher speed counterpart.

For non-motorised VRU the speed difference compared to motorised traffic is an additional risk factor. That is why motorcyclists, despite their helmets, run a particularly high risk: relatively high mass, together with high speed generates a lot of kinetic energy. This combined with the absence of a shell is bound to lead to high casualty and injury levels.

Due to the better internal vehicle safety features, demographic characteristics and the increased popularity of (electric) cycling in many urban areas the number of VRUs is likely to increase as a percentage of road safety casualties. What can be done to reduce the number of VRU victims in road safety statistics?

The survival rate of a VRU (e.g. a pedestrian) decreases dramatically with an increasing collision speed (ref Figure 1). Almost all people survive a collision with a car at 30 km/h. For this reason this should be the preferred speed limit in residential areas. As 30 km/h it becomes very easy to brake and yield to VRU.

Separating traffic on different types of infrastructure hugely benefits road safety. This means pavements and cycle tracks besides the regular road. In this way the speed differences of the various types of traffic are spread over different infrastructure.  This reduces collision and crash risk. Even on pavements and cycle tracks crashes and injuries occur. However, the severity is greatly reduced due to lower speeds, lower speed differences and separation of traffic. Here many crashes or injuries are one-sided, i.e. not involving another vehicle, due to design, bumping against poles or lack of maintenance (lose tiles). Such injuries are not registered as traffic crashes but ‘fall injuries on public roads’.  As such they are not included in road safety statistics.

Speed humps, bumps or plateaus in combination with zebra or cycle track crossings of in streets prone to speeding are also considered to be effective in improving VRU safety.

The ‘(woon)erf’ or ‘living street’ concept was introduced on a large scale in the Netherlands in the 1970s and 1980s initially only in dead end residential areas. VRUs legally have the absolute right of way over vehicles in these areas. Speeds are mostly limited to 20 km/h and the curvy road design is such that speeding is made very difficult. Motorised vehicles are thus only a guest in areas where people live and children play. The living street concept is applied in many other countries. 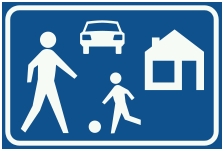 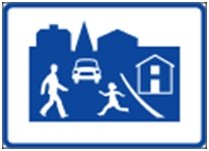 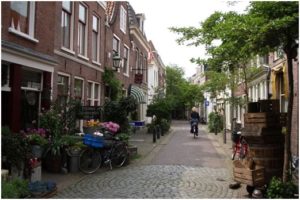 Figure 3 – ‘Woonerf’ or ‘living street’ and signage from the Netherlands and Sweden, where VRUs have priority, vehicle speeds are curtailed and yielding rights adjusted.

Due to the fact that vulnerable road users represent almost half of the road safety fatalities, the impact of effective measures improving their safety are very important. Such measures come from three areas