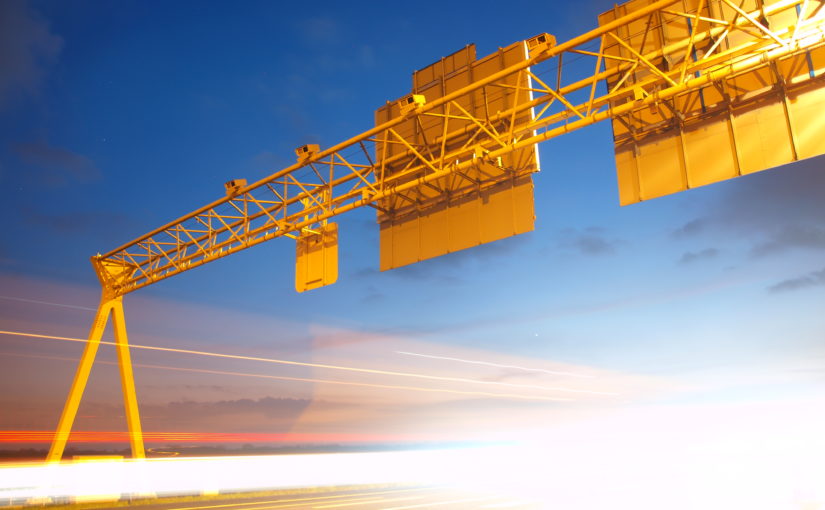 Average speed enforcement technology to secure speed-limit compliance over longer distances and larger areas, is available since the early noughties. It addressed several issues prevalent with traditional speed enforcement methods and has more support from drivers. Compliance is high and road safety benefits are excellent. Many governments have deployed average speed enforcement systems, especially in tunnels and work zones, on bridges and on motorways and national roads with few intersections. Some useful new ASE applications are discussed below.

Average speed enforcement (ASE), also called section control or point-to-point (P2P) speed enforcement calculates speed by clocking the travel time of a vehicle over a predefined distance and is thus based on time, not on speed measurement. License plates or characteristic ‘vehicle signatures’ are registered by entry and exit gate cameras. These data are sent to a matching server which sorts, matches and then compares the time stamps for each data set. Data sets which have been clocked as intervals that are too short for the pre-measured distance have thus been speeding. These images are then marked and kept as evidence on which to issue speeding violations. Since time is such a crucial variable in this process two accurate independent reference time measurements are used e.g. GPS time and network time (NTP). If the deviation between these two times is considered too high the violation will not be validated for further pursuit.

ASE resolves several issues prevalent with traditional speed enforcement methods. With spot speed enforcement many drivers slowed down or even used brakes to escape a fine and then sped up again, the so-called ‘kangaroo effect’. First this happened only at known speed camera locations, but with the advent and increased penetration of speed camera software on sat navs, for all locations. In several countries it is even legally required to use signage to indicate upcoming speed cameras. Braking or slowing down for speed cameras was reported as a cause for congestion or sometimes even crashes. This further encouraged the anti-speed camera lobby.  Depending on the road safety issue addressed by the speed camera, this slowing down behaviour potentially undermines their effectiveness.  When entering an ASE section sudden braking is no longer required.

Another benefit of ASE is the fact that it enforces a speed regime over a longer distance. To get the same effect in a best case scenario, that would require many traditional spot speed cameras. ASE can be used in situations where spot speed cameras are not feasible, e.g. in tunnels, on bridges, in work zones where there are height, mounting or other practical restrictions or safety requirements. Moreover, the speed compliance rate in ASE sections is very high and this high compliance is contagious to other drivers, who also change their driving behaviour. Thus it results in a very calm and steady flow of traffic with minimal speed differences between vehicles, less braking, reduced congestion and easier merges near junctions or ramps, which is an additional road safety bonus next to the speed compliance. Based on the effects after installation of ASEs on 50 road sections the UK the RAC Foundation reports (*1): “The use of average speed cameras has been found, on average, to cut the number of crashes resulting in death or serious injury by more than a third.“ This is a net figure corrected for statistical aberrations and other variations. The fixed and operational costs of ASE systems has also dropped due to lower costs for components and processing power. The use of mobile communication instead of cabled networks also helped lowering costs.

Drivers prefer ASE to traditional types of automated enforcement since they will not be fined immediately when they overtake a truck or other slower vehicle and happen to speed at that particular point. This has resulted in a higher public acceptance for ASE.

Besides tunnels, bridges, motorways and primary roads ASE has recently found new application areas. In Peer in Belgium ASE is being implemented in a central city street with a speed limit of 30 km/h. Objective is to encourage cycling and force motorised traffic to slow down, or otherwise use other roads to bypass the central city.

Also implemented in Belgium, and planned for the Netherlands, are ASE applications to slow down traffic on undivided secondary roads mostly with an 80 or 100 km/h speed regime, which by nature have a higher crash rate than motorways. Such roads could offer places to park, petrol stations or intersections thus presenting opportunities to bypass ASE timing but still has the effect that most drivers will abide by the speed regime.

ASE applications are increasingly used to reduce emissions and noise pollution from traffic. Especially on motorways cutting through municipalities and metropolitan areas. Relevant examples are the A10 in Amsterdam and A13 in Rotterdam. A conflict between the Dutch minister of transport and the municipalities of Amsterdam and Rotterdam in 2014 was resolved when a judge ruled that municipalities have the right to determine the speed regimes on national motorways, when the quality of life of its residents is at stake.

Several ASE cameras can be networked, e.g. at larger scale in a metropolitan area (*2) or smaller scale in a school zone. If a vehicle moves through a zone delineated by an entry and exit camera too fast i.e. it is clocked too early at the exit camera a violation will be registered. It does not matter at which camera the vehicle entered the ASE zone, the distance between the entry and exit camera is automatically calculated by the system and used as reference against the clocked travel time.

ASE systems deliver great benefits that, depending on the circumstances can go beyond, the improvement of road safety, the traditional reason for its implementation. ASEs are also used to manage traffic and improve quality of life by reducing pollution and traffic noise. These days successful ASE applications can also found in cities and along secondary roads. ASEs also enjoy greater public support from the driving public.